Daring to reject what she was created to be, the beautiful and resolute Arueshalae walks the long road to redemption. With Desna’s help, this succubus fights for her own salvation and the right to define both herself and her destiny. Running for many years to escape her former demonic allies, Arueshalae has developed many talents to best help her evade detection and notice. She is a natural rogue with excellent skills using both her starbow and starknife and has various spell-like abilities that can aid the group in whatever challenge they face. 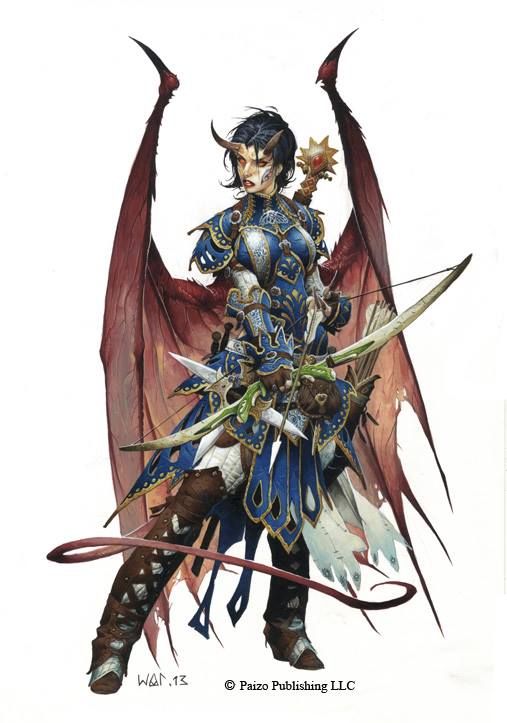 Arueshalae was a former succubus of Nocticula’s court and came to the Worldwound just after the end of the First Mendevian Crusade in order to tempt and corrupt the mortals of Golarion.

One fateful night after she’d seduced a priestess of Desna and drained her nearly to death; on a whim she tried an experiment. Since outsiders don’t need to sleep, they don’t normally dream. Out of curiosity, she stole into the thoughts of her dying victim using detect thoughts while the woman lay sleeping, only to be pulled into the Dimension of Dreams. When the priestess died, Arueshalae found herself somehow trapped, but she hadn’t gone unnoticed.

In daring to allow herself to dream, Arueshalae gained Desna’s attention. She had already observed the succubus’s murder of one of her priests, but perhaps having learned a bit of forgiveness from her own divine ally Sarenrae, Desna did not smite Arueshalae. Instead, she reached into Arueshalae’s soul and quickened her larval core. Memories of her mortal life flooded back at once, memories of dreams that never came true. Desna whispered in her ear: “Even demons can dream."

When Arueshalae woke, she was filled with memories and regret, and immediately set about to atone for her very existence. The brush with Desna awoke within her both mythic potential and a great shame. She used her skills as a master spy to hide her change of heart, but when she acted to save the life of a wayward child who had become lost in the Worldwound (Adlo), the truth came out. She knew she would be equally hunted among the crusaders, and so she opted to remain in the Worldwound-hiding until she could learn something vital that she could present to the crusaders and thereby prove her good intentions. When she learned of how the Templars were using Nahyndrian crystals to infuse demons with mythic power, she sought to discover all she could. She’d only just begun her investigations when she was captured and thrown into a prison below Citadel Drezen. Aponavicius herself tried to force Arueshalae to revert to her demonic nature and failed, but when the marilith left Drezen to join the southern war front, Arueshalae’s prayers to Desna were answered and the wards of her cell fell. She fled, making her way into the Worldwound to hide in the only safe place in the region she could think of – the Lost Temple of Desna her last victim’s final dream had been about. There, Arueshalae waited and hoped for a final chance to aid the Fifth Crusade while fighting against relapsing into her old fiendish ways.

Luckily for her, a year later the Archangels arrived to help her escape the clutches of the hag. In return she offered to aid the crusaders in their effort against the Worldwound and assist them in their assault against the Ivory Sanctum.

Arodus 4714 AR // Arueshalae and Fynna quickly became friends as the sorceress immediately defended her from suspicion from the other members of the Archangels. Adlo is quite smitten with the succubus and is battling his feelings for her (as it conflicts with his anger against demons). Hakim is highly suspicious of Arueshalae and keeps an extra eye on her if at all possible. The other Archangels seem to tolerate her so far as she has been most cooperative with them in both curing the plague and locating the headquarters of the Ivory Templars. 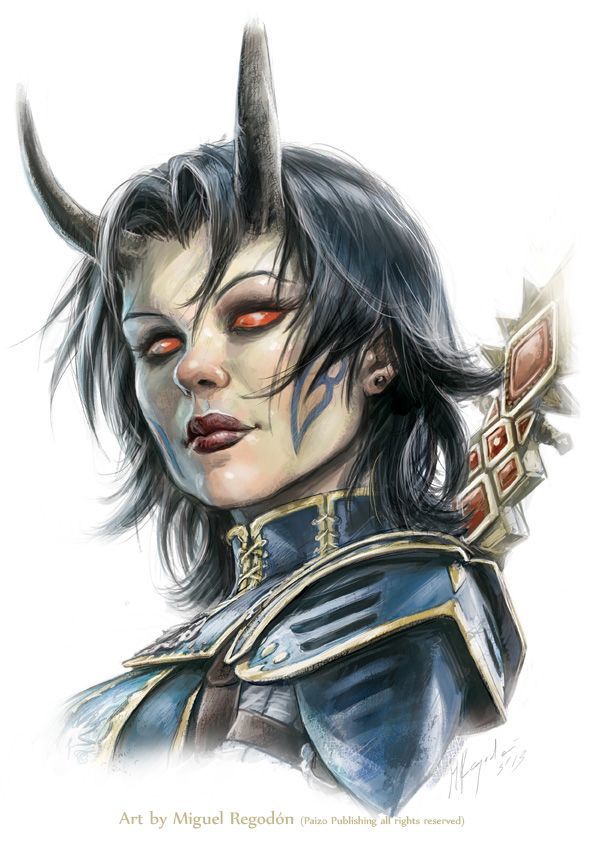